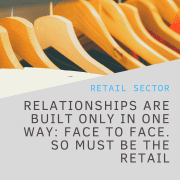 “The secret to success is to anticipate customer needs, to know what they needs even before they know”. They call him the father of the Apple Stores , who created the concept of those iconic stores that people like so much. We recovered an interview that the Harvard Business Review did to Ron Johnson shortly after leaving Apple after eleven years as vice president and head of retail operations

In the interview, Johnson takes a stubborn defense of offline retail stores which he considers , despite the growth of e-commerce, as the main way to shop. ” The physical stores were and still are the key point of customer contact . They are much more than a place of purchase. Stores have to make their customers feel better when they visit them, stores hace to enrich their lives , “says Johnson. The father of the Apple Store say that what grows today is not the analog world versus the digital world. “What you get is the multi-channel strategy where the physical and the digital grow together and integrate”.

According to vice president of Apple, people like to shop and enjoys going to the malls . “The problem is that retailers have no imagination, they do not innovate”explains Johnson. The rules of the game have changed. In the 80 Walmart triumphed, in the 90 GAP was leading and in 2000 the winners were Apple and Amazon . The question is : Who will be the leader in the next decade? Ron Johnson says that ” will be the one that best combines mobile , internet and physical experience in the store. Whoever does an integration that creates value . ” According to Johnson , much as E -Commerce proliferate , ” relationships are built only one way, and face to face. That is human nature and thus must be retail . ”

Finally , the creator of the Apple Stores , makes a retrospective of the history of retail and ensures that there are two ways to win : being cheap or being the most original, the most innovative . What can not be , says Johnson, is to try to be both at once. The secret of success? Says that there is only one: anticipate customer needs. To know what they need even before they know it. Seems easy , right?

Video Flame: You can see now on our YouTube channel Flame´s participation in...